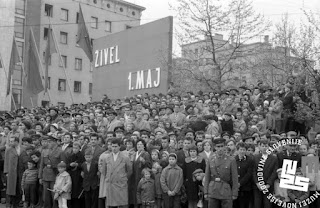 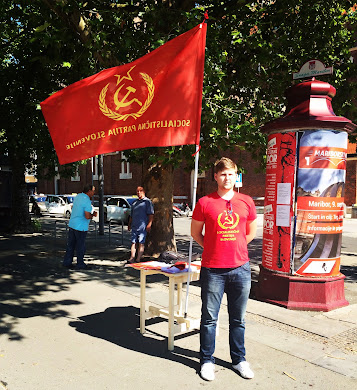 Appeal of Communist and Workers’ Parties of Europe for the European Elections of May 2019:
For the strengthening of the workers’ ‐ peoples’ struggle, against capitalist exploitation and
European Union – For a Europe of the peoples, of socialism!
“Workers, self‐employed in the cities and the country side women, youth, pensioners, people with
disabilities, We, the Communist and Workers’ Parties that undersign this Declaration, call upon you on the occasion of the European Elections of 2019.

The EU, that functions as a European imperialist center was and continues being a tool for the
European big capital to raise its profits and guarantee its domination; It is not serving, neither can ever serve the needs of the working people.
The expectations that the EU can be reformed in a “pro‐people” direction have been proved to be
futile. The expectations cultivated regarding a change towards the interest of the peoples though its
supposed “democratization” are unfounded.
The workers of Europe, the popular strata can overthrow with their struggle today’s negative
correlation of forces and meet the preconditions to open up the road for a Europe of socialism, that will guarantee the right to work, social rights, social security and income, the future of the working people.

Our Parties stand for:
- Essential raises in salaries and pensions.
- Public and free of charge Health‐Care, Education.
- The support of the struggle of the workers and of the unemployed for full‐time and stable
jobs.
- Democratic rights in the workplaces, working‐ and social‐rights, social‐security.
- The rights of the immigrant workers and the struggle against the causes that force the
peoples to abandon their countries.
- Support of the small and medium‐sized farmers.
- The essential protection of the environment that is sacrificed for the profits of the big
capital.

‐ We condemn the imperialist wars and interventions. We struggle in favor of peace, for the
ousting of all US‐NATO bases, against NATO, against the “Partnership for Peace” and the European army, against the PESCO and the participation in imperialist wars and interventions.
‐ We struggle against the frontal attack against the workers that is conducted either in conditions
of capitalist crisis or in conditions of capitalist “development”.
‐ We align ourselves with the working‐class and popular families that experience the dramatic
consequences of the capitalist mode of production which is worsening profoundly the situation of the
working class and of the popular strata.
We call upon the working class, the peoples:
- To multiply their struggles against the European Union, against this union of capital, that
hurts the peoples’ rights.
- To strengthen their resistance to the capital’s attack, to the attacks of the parties that
serve the capital’s interests, to strengthen their struggle for every popular problem.
- To support with any suitable way the Communist and Workers’ Parties that condemn the
EU in the battle of the European Elections, in May 2019, to weaken the parties that support the EU and its politics, that defend the “EU’s one‐way road” of the capital and the supposed “democratization” of the EU. This stance will strengthen the popular struggle in the whole Europe, the workers will struggle from better positions.

The EU does not serve the people, the EU serves the capitalist class, the interests of the
monopolies, the concentration and centralization of capital. The EU enhances its features as an imperialist economic, political and military bloc contrary to the interests of the working class, of the popular strata.
The peoples have every interest to oppose to the operation of manipulation that the EU, its
mechanisms, its governments and the parties that support this imperialist union are organizing.
They promise that the EU can guarantee for us the right of work, our working and social‐security
rights. They aim to convince the peoples that they can guarantee for them better living standards. It is a big lie. Let us be reminded of the facts: in the EU there are 16.6 millions of unemployed;
underemployment is continuously expanding reaching at 21% of the total or 43 millions in numbers; those that live at or under the poverty line are more than 110 millions; the future of the youth is undermined.

Fundamental rights of the working class and of the popular strata are being abolished. Mass lay‐
offs are fortified, the right to strike is getting limited, the age‐limits for pensions are being raised and
pensions are being cut down, private social‐security is strengthened. The poor farmers are being
destroyed with the implementation of the Common Agricultural Policy, the self‐employed are being
strangled by the competition of the big monopolies, inequality and discriminations at the expense of
women are getting more intense. Migrants are persecuted while the politics that force them to abandon
their home countries are strengthened.
Repression against the working‐class and popular struggles is enhanced, new mechanisms of
keeping tabs on are continuously created.

Political, financial and military cooperation with the Israeli state which is murdering the
Palestinian people is upgraded.
The “Stability Pact”, the “Enhanced Economic Governance”, the “Banking Union” and other anti‐
peoples tools that are used have been incorporated in the anti‐people toolbox of the EU, a new dramatic situation is being configured against the peoples.
The so‐called “Global Strategy” of the EU, the “Common Security and Defense Policy” and PESCO
constitute dangerous means for wars and interventions, serving imperialist aggressiveness.
The motor of capitalist unification is the interests of the European monopolies; the EU
continuously develops towards a reactionary direction against the peoples.
Consequently, it is obvious that neither this inter‐state capitalist union, neither the European
Central Bank, nor the European Parliament can become pro‐people, as the European parties that support the EU strategy are claiming.
Moreover, neither the EU can transform into a “formidable adversary” of NATO and the USA, as
all kinds of supporters of the EU are arguing.
EU closely cooperates with NATO and the USA against the peoples, while the interimperialist
competitions are manifested both inside the EU, both with the formation of groups of countries and with withdrawals, such as the Brexit.
The rivalries with the USA but also with Russia and China are intensified for the control of the
markets.

The Communist and Workers’ Parties that undersign this Declaration:
‐Underscore that the capital’s offensive is unitary and has to do with all the member‐states of the
EU, as well as with the rest of the states that are situated in the European continent and on these grounds it is necessary to strengthen the common struggle of the CP’s and of the peoples, to develop solidarity with the struggle of the workers across the whole Europe and worldwide.
‐Stress that there is another way of development for the peoples. The alternative of a different
Europe emerges out of the workers’ struggle; a Europe of the prosperity of the peoples, of social progress, of democratic rights, of equal cooperation, of peace, of socialism.
‐Believe in the right of each people to sovereignly choose its way of development, including the
right to disengage itself from the EU, NATO and every other imperialist organization; to struggle for thesocialist path of development. This is the real answer against the organized effort of misleading the peoples. The peoples of Europe have no interest to follow the forces of cosmopolitanism of capital that are fanatic supporters of Euro‐atlantism. Likewise, they have no interest in the forces of nationalism, that also serve other class interests and not those of the peoples, using the measures of protectionism and “euroscepticism” as their “vehicle”. Moreover, the people have nothing in common with the nationalist, fascist – Nazi parties that aim at utilizing the peoples’ agonies and problems to strengthen their forces as the sword‐point of the dictatorship of the monopolies.
The support of the Communist and Workers’ Parties is the only real pro‐people response, both to
cosmopolitanism and to the so‐called euroscepticism. It constitutes the appropriate response to
anticommunism and to the reactionary, anti‐historical identification of communism with fascism, that isflesh of the flesh of the capitalist system.

We call upon the working class, the peoples of Europe to respond positively to this appeal of the
Communist and Workers’ Parties. Εach party in its own country organizes the struggle of the workers. The Communist and Workers’ Parties fight against the EU, comprehensively against the imperialist unions. Their reinforcement in every politcal battle contributes to the development of the struggles of the peoples: We call on the peoples to weaken the forces that support the EU, in any way, and cultivate illusions that the EU can be fixed.

‐NO to the EU of the monopolies, of capital and wars!

‐Onward for a Europe of the prosperity of the peoples, of peace, social justice and democratic
rights, of socialism!” 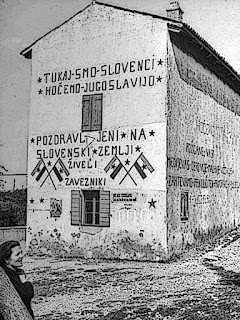